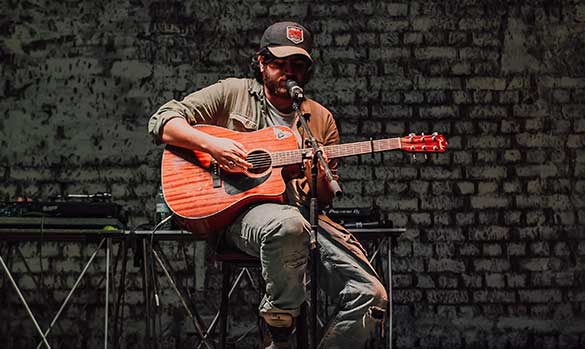 Ali Saffudin is a singer-songwriter from Srinagar, Kashmir, and has been producing and performing his own music since 2014. He is gifted with the ability to translate the hopes and pain of an ill-fated generation into a blend of folk, rock, blues and Kashmiri Sufi music. Known throughout the valley for his magnetic and captivating voice that serves to amplify the plight of his people and the cultural heritage of the Kashmiri community, Saffudin is one of South Asia’s critically acclaimed voices. He deftly manoeuvres between tender, heart-wrenching ballads and power-packed, folk-punk anthems and his debut record has seen him be recognised as one of the most exciting artists to emerge in the region today. His recent collaborative song ‘Subhik Waav’ with Noor Mohammad Shah showcased at I Believe Art Matters 2021 has surpassed 300k views on YouTube.