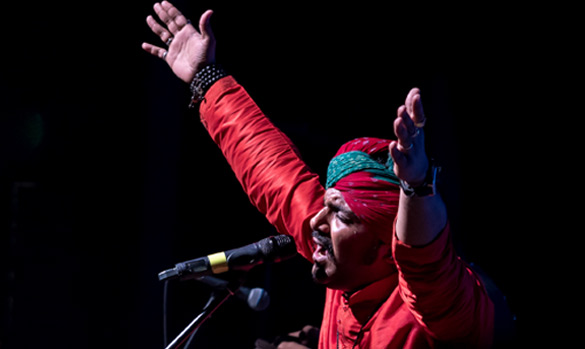 The Kutle Khan Project is Khan’s voyage into a world of music beyond boundaries; where he delves into his folk roots and draws from his musical experience and influence of collaborating with musicians from different cultures.What remains is a perfectly distilled blend of musical styles with a strong Rajasthan folk sensibility. He received GIMA AWARD in 2015 for his composition Moomal and was also featured in the IIFA Awards Mumbai 2019. He received acclaim for his appearance on Coke Studio Season 3 with Amit Trivedi. He was also honored as best folk singer of 2019 by the Indian Icon Film Awards. The Kutle Khan Project is a unique collective of Rajasthani folk musicians highlighting Kutle Khan, a multi-talented folk musician who has performed on various stages across the world. His music is as seductive as it is rhythmically complex. He embodies the rich melodic and sophisticated rhythmic traditions of Rajasthani folk music, and his performances are informed by his understanding of contemporary Indian and Western musical traditions. With this, Khan produces the most passionate and energetic live Sufi and Indian Folk. Coming from a family of musicians, this master of the khartal from the land of the Rajputs began playing music at the age of 8, learning every instrument he could get his hands on. A singer as well as a musician, Khan not only plays the dholak, khartal, bhapang, harmonium, sarong, the lot, proving that there’s no percussion he can’t play, he also sings soulful renditions, and also writes and composes his own songs. Apart from his many performances stunning his audiences in India, he has since travelled to 72 countries, gaining popularity and spreading Indian Folk and contemporary sufi music to all parts of the world. He has performed with the legendary Susheela Raman, a UK-Tamil artist, Midival Punditz, Papon,