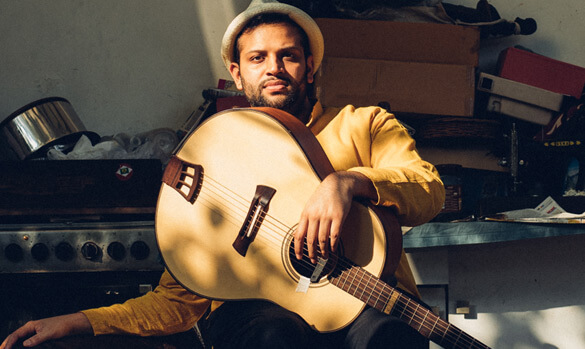 Dhruv Visvanath is a singer-songwriter, producer and accomplished acoustic guitarist from New Delhi, India. Having spent a large part of his childhood in various parts of the world like London, Zambia, Hong Kong and Mumbai to name a few, he uses the collective experiences from his past to craft his songs and stories. In 2018, Visvanath was India’s only entrant to South By South West, Austin, Texas USA, and the Canadian Music Week in Toronto. His unique style of playing the guitar led him to be mentioned as one of Acoustic Guitar Magazine’s 30 Great Guitarists Under 30, alongside the likes of Ed Sheeran, Newton Faulkner, Laura Marling and many others. Under VLT records, he released his debut album Orion in 2015. His sophomore release, The Lost Cause, released in 2018, was crowdfunded and released independently, debuting at #2 on iTunes Apple Music’s top 50 albums at the time of release. His unique style of playing the guitar allowed him to develop a relationship and an endorsement with the Dehradun Guitar Company in 2018, resulting in his own custom guitar he so lovingly calls, Willow. He continues to evolve as a songwriter and producer, which is especially showcased in the work he’s done for numerous independent and mainstream films in the Indian cinematic landscape. In 2019 alone, he has written and produced for two independent films, as well as worked with the likes of Vishal Bharadwaj for his film Sonchiriya and A.R. Rahman for the exclusive Netflix release Blinded By the Light. He has also been involved in the production an upcoming video game by independent game developer Prashast Thapan, which is to be released in the coming year. In 2020, he released 7 brand new singles bringing much light and energy to a pandemic filled year. Later in the year, a Bollywood debut for his music made its way to Bejoy Nambiar’s Taish, with his song ‘The Mountain King’. And to top it off, thanks to the folks at Apple, one can now use his music to assemble ‘Memories’ through the iOS photo app, on every portable iOS device, in the world.