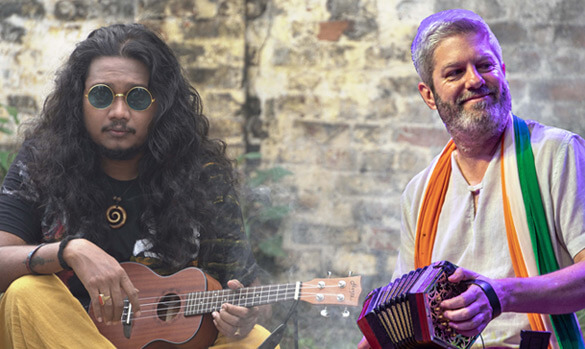 Belonging: A Belfast-Kolkata online musical collaboration featuring Jason O’Rourke and Deepmoy Day. The idea behind this project was to carry out an online musical collaboration that could be delivered in socially-distanced settings taking into account current and possible future public health restrictions due to the global Covid-19 pandemic. The ‘Belonging’ project was funded by the UK National Lottery through the Arts Council of Northern Ireland. We wanted to bring together the traditional music of India and Ireland by finding common ground between the two ancient musical cultures, and also by composing new material, to establish a deep collaboration. Day is firmly rooted in the Bengali tradition and O’Rourke in the music of the North of Ireland. To try and be as inclusive as possible, the pair have worked on songs in Hindi as well as Bengali. Their backgrounds are important to the theme of the project with both of their family histories involving migration across lines drawn on maps at the end of the British Empire. Thus, they have a song from East Bengal paired up with an Irish tune that O’Rourke picked up as a child in England. By bringing their musical traditions together, the pair hope the project is a positive demonstration of that process of cultural mixing, communication and inter-connectedness.