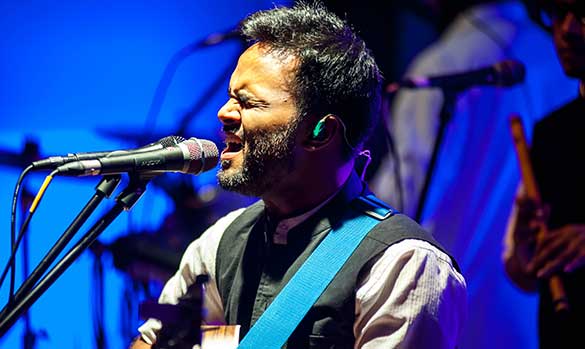 Advaita is a New Delhi-based band and one of India’s leading musical acts. Formed in 2004, with more than 300 concerts in India and abroad, 2 successful albums, and several awards and accolades under their belt, the band is credited with creating a new contemporary Indian sound weaving together the intricacy & spirituality of Indian Classical music with the energy and youthfulness of rock, pop & electronica. In 2008 they were one of four Indian bands chosen for the Soundpad Project, and went on to tour the UK playing in London, Cardiff, Oxford & Liverpool, and at The Great Escape Festival, Brighton. After the success of ‘Grounded in Space’, their second album ‘The Silent Sea’ won Best Album & Best Album Art at Jack Daniel’s Annual Rock Award (2012-2013), and Best Rock Album at the Global Indian Music Awards (2012). Advaita has also featured on iconic music shows such as MTV Coke Studio India, MTV Unplugged and The Dewarists.