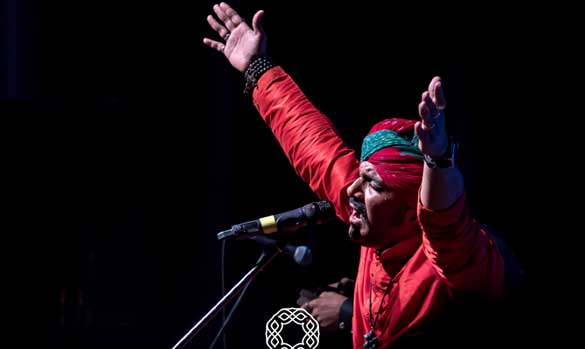 The Kutle Khan Project is a unique collective of Rajasthani folk musicians highlighting the multi-talented Kutle Khan and his voyage into a world of music beyond boundaries. Their songs boast of a perfectly distilled blend of musical styles with a strong Rajasthani folk sensibility. Khan received the GIMA AWARD (2015) for his composition Moomal and was also featured in the IIFA Awards in Mumbai (2019) among other accolades. He has been featured on multiple music shows such as The Dewarists, MTV Coke Studio Season 3 with Amit Trivedi, MTV Unplugged and Soundtrek on Fox Traveller. Khan writes his own songs and plays the dholak, khartal, bhapang, harmonium, sarangi and morchang, proving his versatility in playing percussion instruments. Apart from performing in India, he has travelled to 72 countries and has performed with the legendary UK- Tamil artist Susheela Raman, Midival Punditz, Papon, Tritha Electic, Amit Trivedi and other reputed artists.